The highest peak in French Pyrenees, photographed from South of Aragon province.

255 kilometers covered in a single picture to cross borders above the plains around Ebro river.

This panorama was taken the same briliant day as this panorama of Monte Perdido area, and from the same place as this picture of Posets and Perdiguero peaks.

As it has been learnt by us in the last months, Cantavieja and its surroundings are one of the best (and farthest) places to contemplate the greatness and magnificience of almost all Pyrenees range.

It is located at almost 2 hours by car from Valencia, in the East coast of Spain, and can be easily reached from other major cities in Spain as well.

I arrived there at the same time the sun was rising, and a great anticyclon managed to clear the skies, maintaining all the pollution next to ground, and leaving extreme clean air above it. 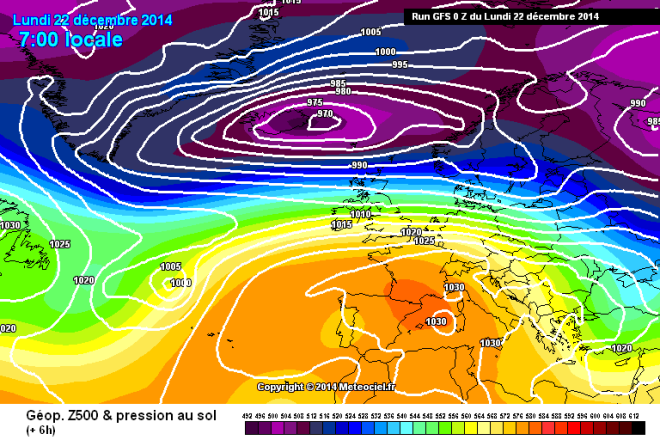 As we can see in the image above (credits to meteociel.fr – Archives NCEP) the anticyclon was pretty intense over Spanish peninsula, creating the situation described.

Showing the line of sight in a map, it can be seen how it crosses the main part of air inside the hot core of the anticyclon, thus giving the best result in air dryness (a so in transparency) of all that episode.

Later on, the anticyclon continued to move, but maintained over Spain, allowing to achieve some other great pictures by the beggining of January 2015. At  that days it became so intense that it broke the highest pressure record in some areas.

In the image, we can see Vignemale massif, together with some other peaks at the East:

SEND US YOUR PICTURES!